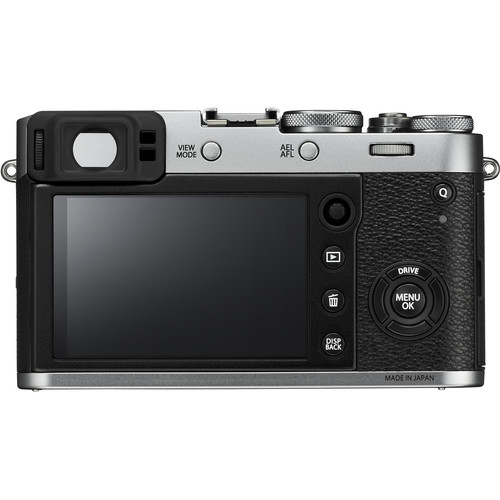 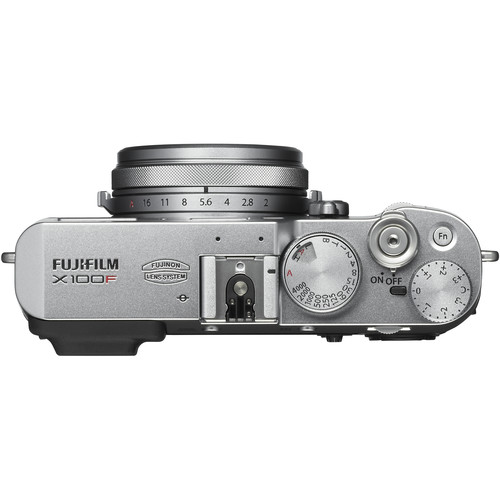 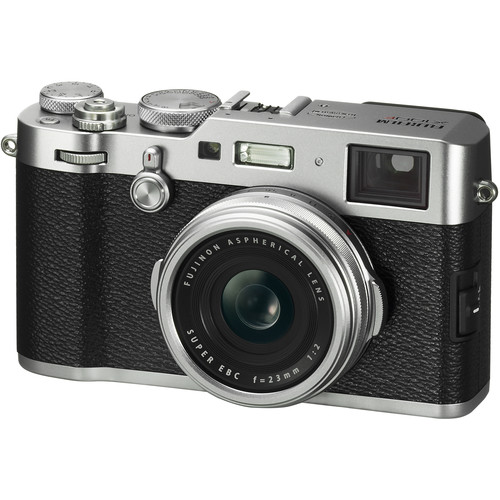 Complementing the imaging specs is a range of physical attributes that are the hallmark of the X100-series. The Advanced Hybrid Viewfinder, which meshes both optical and electronic viewing means in a switchable manner, has been updated with adjustable magnification for the electronic rangefinder function for more precise manual focus control. Additionally, the body also sports a physical ISO dial, which is incorporated within the shutter speed dial, and the exposure compensation dial can now be set to a C position for an increased +/- 5 stop range of adjustment. Additionally, the rear of the camera sees the inclusion of a focus lever for faster focus point selection, and the majority of the physical controls, buttons, and dials have been moved to the right-hand side for easier one-handed use.

24.3MP APS-C X-Trans CMOS III Sensor and X-Processor Pro
Utilizing Fujifilm’s unique, randomized pixel array, the 24.3MP APS-C X-Trans CMOS III sensor affords a high degree of image quality and sharpness due to the omission of an optical low-pass filter. Versus conventional pixel patterns, the X-Trans design more closely mimics the organic nature of film in order to produce nuanced colors and smooth tonal transitions, while also reducing moiré and aliasing. Additionally, the sensor is paired with the X-Processor Pro image processor to yield smooth, low-noise results, an extended sensitivity range of ISO 100-51200, and quick performance speeds throughout the camera system, including an 8 fps continuous shooting rate, Full HD 1080p video recording at up to 60 fps, an AF speed of 0.08 seconds, 0.2 second shooting interval, 0.5 second startup time, and a 0.01 second shutter release lag.
Fujinon 23mm f/2 Lens
The built-in 23mm f/2 fixed focal length lens gives a 35mm equivalent focal length, making it a great single prime lens length for everyday shooting. This fast wide-angle lens is purposefully designed as non-interchangeable and non-collapsible in order to garner the highest optical quality possible. The lens also uses one aspherical element to reduce spherical aberrations for improved sharpness, and a Super EBC coating has been applied to suppress lens flare and ghosting for greater contrast and color fidelity.
Advanced Hybrid Viewfinder
Both optical and electronic viewing means are incorporated into the unique Advanced Hybrid Viewfinder, which provides both the simplicity of an OVF with the technological advancements of an EVF. Switching between both viewing methods is done with the dedicated OVF/EVF switching lever, enabling quick transitioning between both modes. The OVF has its benefits in providing a clear, unadulterated view of the scene you’re photographing and reduces the shutter lag time to a minimum. For fine-tuning of focus, exposure, white balance, and other camera settings, the EVF gives you the ability to monitor all of the applied settings prior to making the exposure.

In contrast, the high-resolution 2.36m-dot EVF provides you with 100% frame coverage along with the ability to utilize electronic focusing aids for precise manual focus control. By using the phase-detection pixels located on the imaging sensor, Digital Split Image is able to assist in acquiring precise focus by showing comparative in and out of focus areas of the image. Also contributing to manual focus accuracy, focus peaking has been integrated and enables a more objective system of focusing by way of highlighting sharp edges and lines of contrast in a clear manner.

When working with the EVF, you can also utilize Shooting Effect Reflection settings in order to preview and utilize selected camera effects, such as Film Simulation modes. When this setting is turned off, the image will revert to a natural view, void of any exposure or camera settings applied, to better suit working in darker conditions and to greatly reduce any display lag.
Body Design
Rear 3.0″ 1.04m-dot LCD monitor for image playback and review, menu navigation, and for live view shooting.
A physical ISO dial has been incorporated within the shutter speed dial to allow for intuitive, direct switching of sensitivity settings.
Focus lever has been added to lens to improve manual focus adjustment.
Rear focus lever is available for intuitive selecting and switching of AF points.
The physical exposure compensation dial now features a C position to permit an expanded +/- 5 EV range when working with the control dials.
The majority of the camera’s control buttons and dials have been placed on the right-hand side of the body to enable easier one-handed use.
91-Point Autofocus System
Utilizing both contrast- and phase-detection methods, the hybrid autofocus system employs 91 total points, which can be divided into 325 total areas for a high degree of focusing accuracy in a variety of lighting conditions. Approximately 40% of the frame is covered by 49 phase-detection points in order to provide fast AF performance to suit working with moving subjects.

When working with autofocus, you can choose either single-shot AF-S mode or continuous AF-C mode, and each can be used in conjunction with Single Point AF, Zone AF, or Wide/Tracking AF settings.
Film Simulation Modes
Taking advantage of Fujifilm’s vast history in traditional film-based photography, the X100F integrates several Film Simulation modes to mimic the look and feel of some Fujifilm’s classic film types. A refined Classic Chrome mode is designed to deliver muted tones and a deep color reproduction, similar to that of a dated slide film. Pulling from their more contemporary line of transparency films, Provia offers natural-looking tones for everyday shooting, Velvia produces a more dramatic and rich tonality with deeper color saturation, and Astia gives less contrast for a softer depiction of skin tones. Mimicking their negative films, Pro Neg. Std. gives smooth image tones that are suitable for accurate color renditions, while Pro Neg. Hi produces a more dramatic feel with the ability to draw color out of a variety of lighting conditions. In addition to the colorful benefits of these Film Simulation modes, there are also monochrome modes that simulate the look of traditional yellow, green, and red black and white contrast filters, as well as an Acros mode that can also be paired with colored filter effects. A sepia mode is also available for producing an inherently nostalgic look.
Other Camera Features
Built-in Wi-Fi lets you wirelessly transfer images or remotely control the camera from a linked mobile device.
Integrated three-stop neutral density filter benefits working in bright light conditions with wider aperture settings or slower shutter speeds.
An electronic shutter function affords high shutter speeds up to 1/32,000 sec.
Auto Macro focusing mode lets you focus on subjects as close a 3.9″ away.
Digital Teleconverter settings let you simulate the look of a 50mm or 70mm lens.
Advanced Filters: Toy Camera, Miniature, Pop Color, High Key, Low Key, Dynamic Tone, Soft Focus, and Partial Color (Red, Orange, Yellow, Green, Blue, and Purple).