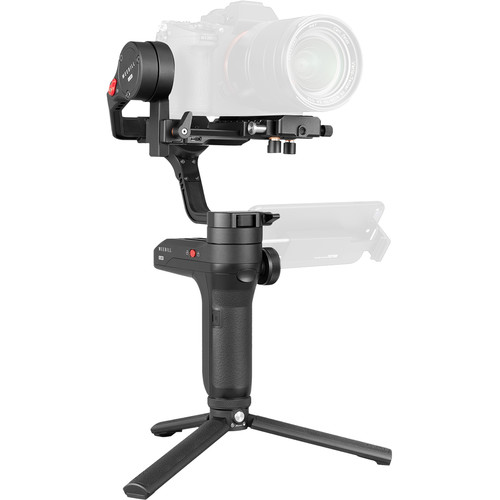 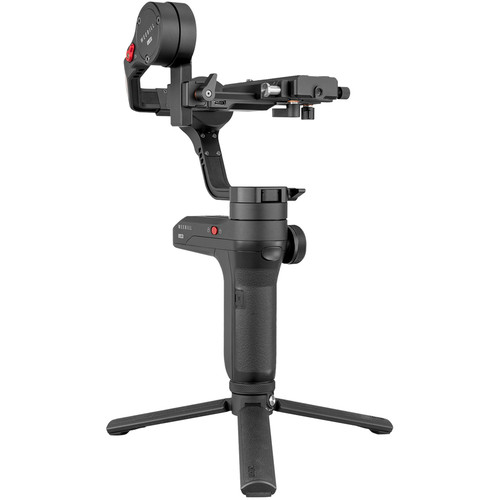 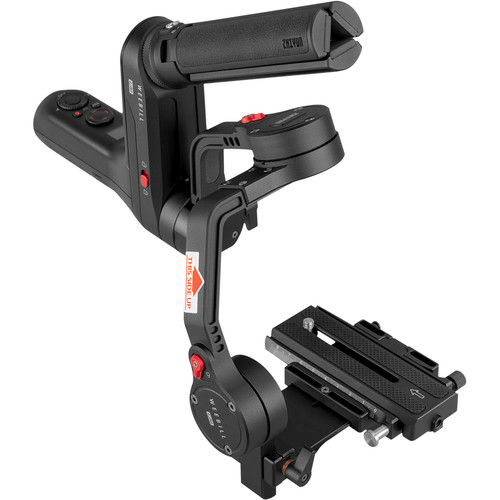 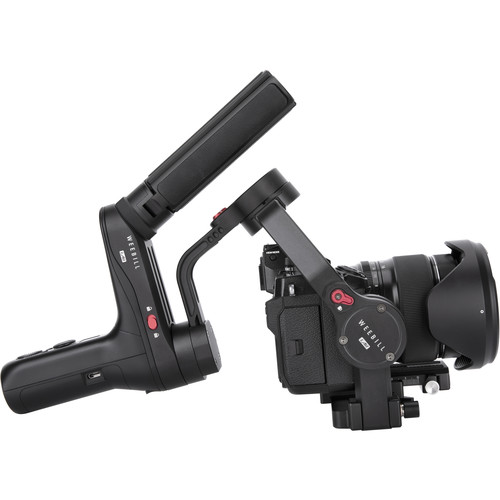 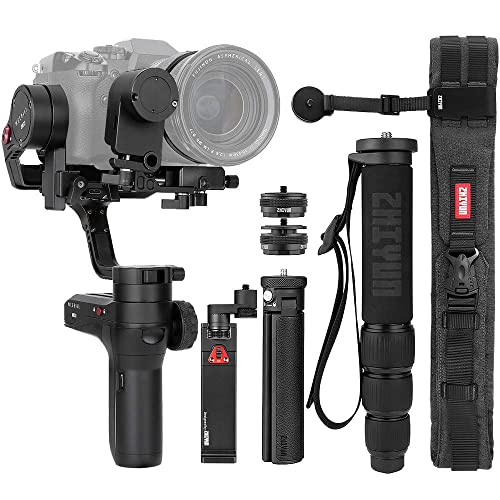 The Zhiyun-Tech WEEBILL LAB introduced a new design to motorized handheld gimbal stabilizers. Zhiyun has added support for a mini tripod in the upper section of the gimbal, allowing for two-handed operation as well as easily switching to underslung mode. At the same time, Zhiyun has shortened the main handle to make the gimbal more compact and lighter. The WEEBILL LAB supports up to 6.6 lb and offers pan follow, full follow, locking, POV, vortex, and PhoneGo modes with 360° pan, tilt, and roll rotation. PhoneGo mode enables the gimbal to operate at maximum follow speed for extreme sports and similar applications. The WEEBILL runs for up to 10 hours on two supplied 18650 batteries.

The WEEBILL LAB supports a single external servo motor for controlling focus or zoom using the onboard handwheel on the side. The TransMount Max Servo is recommended because it has the torque to handle zoom (which requires more power than focus adjustment) and can be used interchangeably between the focus and zoom rings.

Via a Wi-Fi connection to an iOS/Android phone or tablet, the WEEBILL LAB is capable of wirelessly transmitting your video recordings to your mobile device in real time in 720p resolution. This feature is compatible with select cameras such as the Sony a7S and Panasonic GH5. Please see Zhiyun-Tech’s website for a full camera compatibility list.

The gimbal includes an iOS/Android ZY PLAY app (free download) which provides features such as panorama, focus time-lapse, motion time-lapse, long exposure time-lapse, camera settings, and more. The WEEBILL also has an OLED display and onboard controls including a joystick and shutter release button.

Another major feature of the gimbal is an axis latch lock system consisting of a separate latch lock on each axis. This feature allows you to lock the individual axes to remember your balance positions when powering the gimbal off. This way you won’t have to rebalance each time.

Along with the WEEBILL, Zhiyun has released an entire ecosystem of optional, dedicated TransMount accessories to allow for more enhanced use of the gimbal. These include a phone holder for monitoring, servo motor, camera belt, and specialized monopods that work together with the belt and gimbal to allow for stable jib-style shots. Another useful accessory is the TransMount Quick Setup Adapter which allows you to attach the included mini tripod by quick release functionality. The mini tripod can also be attached the standard way on the bottom of the gimbal, to function as a stand or extension. If you incorporate two Quick Setup Adapters, you’ll be able to quickly move the mini tripod between the two locations. You can also add a second mini tripod and have one in both positions.

The WEEBILL LAB doesn’t support many 3rd-party 18650 batteries because it requires the slightly shorter kind made by Zhiyun-Tech, so only Zhiyun-Tech 18650 batteries are recommended.
Crafted Latch Design
The WEEBILL LAB is designed with a red latch next to each axis for saving the balance positions when powering the gimbal off for storage or battery swaps. When powered back on, the gimbal returns to its balance positions. This way you won’t have to rebalance it every time you power it on.
Wireless Image Transmission
Via a Wi-Fi connection to an iOS/Android phone or tablet, the WEEBILL LAB is capable of wirelessly transmitting your video recording to your phone as a 720p image in real time.
Dual QR Plates and Enhanced Balancing System
The WEEBILL LAB camera balancing system features the above-mentioned latch design plus dual quick release plates (Arca-Swiss/Manfrotto). This combination allows balancing the camera and getting the gimbal ready for operation faster and easier. The dual quick release plates consist of a Manfrotto baseplate and Arca-Swiss camera plate. With the camera plate attached to your camera you can transition between equipment and not have to rebalance the gimbal when attaching the camera back on the gimbal.
PhoneGo Mode
In addition to the standard operational modes, the WEEBILL LAB also features PhoneGo Mode, which lets the gimbal operate at maximum follow speed for extreme sports and similar applications.
ZY PLAY
The included ZY PLAY iOS/Android app offers features such as panorama, focus time-lapse, motion time-lapse, long exposure time-lapse, and more.
ViaTouch Control System
The WEEBILL LAB’s ViaTouch Control System consists of a variety of controls that come up on the ZY PLAY app and allow for framing shots, controlling certain gimbal movements, and adjusting camera settings.
Wireless Password
The default Wi-Fi password for the WEEBILL LAB is “12345678”.